IBM (NYSE: IBM) Security today announced the results of a global study which found that data breaches now cost surveyed companies $4.24 million per incident on average – the highest cost in the 17-year history of the report. Based on in-depth analysis of real-world data breaches experienced by over 500 organizations, the study suggests that security incidents became more costly and harder to contain due to drastic operational shifts during the pandemic, with costs rising 10% compared to the prior year. 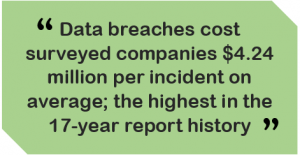 Businesses were forced to quickly adapt their technology approaches last year, with many companies encouraging or requiring employees to work from home, and 60% of organizations moving further into cloud-based activities during the pandemic. The new findings released today suggest that security may have lagged behind these rapid IT changes, hindering organizations’ ability to respond to data breaches.