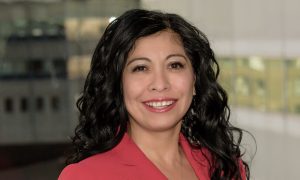 When asked about her greatest personal or professional achievement, Cyndi Izzo says Bar none, that she is the mother of four daughters. She considers it her greatest achievement as well as her most beautiful reward. “The fact that my girls identify me not only as their mom but also as their role model … well, that’s my top priority and my beacon,” she beams.  Her second-born daughter, Devyn, once wrote, “Cyndi’s success can be attributed to her persistent work ethic in both her personal and business life” in a college essay titled “My Hero — A Fighter: Cyndi Perez Izzo.” balancing motherhood with a demanding career she was overwhelmed to receive that validation after years of working so hard and so long.. Her daughters often hear her on the phone as a senior leader mentoring young professionals saying, “it’s OK to learn from their mistakes” or to “be gentle with themselves.” “To know that they see the authenticity in these words as they see me living by them feels pretty darn good.”